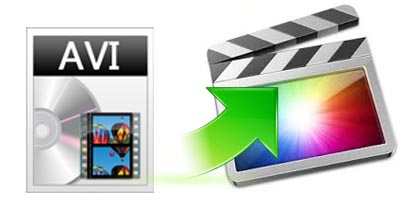 Many of our video files today exist in our computers as .avi files. These.avi files can be read by various media players and video editors across different platforms and devices. Chances are, most of AVI files are not compatible with Final Cut Pro X and FCP 7. Luckily, there’s an easy workaround to make AVI files work perfectly with FCP. This tutorial will show you what’re the reasons and what’s the simple solution to fix the problem. 2 parts are included:

Final Cut Pro only reads AVI that both the audio and the video were compressed by using a codec that FCP can recognize. If your AVI video files are not imported, it’s because of the codec used to create the AVI file is not supported by FCP, even if you have Perian installed, which only allows you to play AVI in QuickTime. If you want to edit AVI in Final Cut Pro X or FCP 7, the easy option would be converting the AVI files to a more editing-friendly format, such a Final Cut Pro’s ProRes.

Q: I imported an AVI file to FCP X, and it goes through the copying process, but nothing showes up on screen.
Q: AVI played just fine in QuickTime, but they “grey out” in the import window, so I couldn’t import to FCP 7.
Q: I can import my AVI clips into FCP X, but when I play them, there’s an image but no sound.
Q: My AVI plays smoothly in QuickTime, but in FCP 7, I get audio but no picture.

Part 2: The Simple Solution: Convert AVI to an FCP-Compatible Format

All in all, FCP only supports some types of video cameras AVI footage via the camera card reader accessory, while it won’t let you import downloaded AVI movies or AVI videos from other sources into Final Cut Pro X or FCP 7. For most AVI video files, you need an app like Brorsoft Video Converter for Mac to make AVI file compatible with Final Cut Pro. Brorsoft Video Converter for Mac is fully compatible with all major Mac OS X operating systems like Mavericks, Mountain Lion, Lion, and Snow Leopard.

Overall, the program is a professional yet all-in-one video conversion tool. With it, you can easily rewrap all AVI files to ProRes 422, ProRes 422 HQ or 4444 for using in Final Cut Pro X/7/6. Italso provides simple video editing functions for you. Besides, the Mac video converter canconvert HD videos from HD camcorders or DVs (like JVC, Panasonic, Sony and Cannon) forediting in Final Cut Pro, Final Cut Pro X, Final Cut Express, iMovie, Avid MC, Adobe PremierePro etc. Just download it and follow the tutorial below to convert AVI to Apple ProRes for FCP X/7.

How to Convert AVI for Editing in Final Cut Pro

Step 1: Launch the Mac AVI to FCP Converter; click “Add” button from main menu to browse your computer hard drive and select the AVI files you want to convert. Or you can easily drag-and-drop files into this application for converting. You can also load video files formatted in .mkv, .wmv, .flv, .vob, etc.

Once the AVI to ProRes 422 conversion is done, you can transfer your AVI files into Final Cut Pro X for editing smoothly on Mac with ease.