When Upgrade the Premiere CC to the 2015.3 Version, lots of users reflect that all of the .mts files can not be imported while everything worked fine with CC2015.2. In this case, this article comes out. It divided into 3 Part, you can direct jump to the solution, somehow.

1. After update, no more MTS

I just updated Premiere July 2016 which I’m always reluctant to do due to new bugs, the first thing I noticed was all my MTS files are no longer recognised.  It says media is offline.  Secondly, all my windows icons are now blank.  Thirdly, all my historical menu files are from about 2 years ago, WTF?

When I Installed the new CC2015.3, one problem appeared with video AVCHD: they are not recognized and off line. These rushes have extension MTS

I have to find again these media and localised them to the disk, but I lost the sound track!

Could you help me  please? Did someone meet this trouble?

I am trying to import (or open a project containing) long video clips, where the source files are Canon MTS files. They would normally be spanned, and joined in Media Browser. I can import and open a short, 4-minute video clip. But if I try to import files that are part of a 2-hour video, my computer freezes up, to the extent that Task Manager can’t open, and I have to do a forced reboot by holding down the power button.

But for the past 4 days, I’ve had this problem with the same videos, I try to import them by dragging and everything else but my program keeps freezing and then crashing, I doesn’t happen with other video formats, just the MTS I am working with. I have read a bunch of solutions but they don’t work for me. I’ve tried to unistall and install Premiere, but nothing. I think it had to do with the last Adobe Cloud update, but I’m not sure.

On my former mac I had no issue importing AVCHD files in premiere pro cc 2015.2

I am importing correctly from media browser and the file structure is intact as was written to the media card.

3. Scroll down to the section titled ‘FIND ADDITIONAL APPS’.

4. Click on the ‘All Apps’ drop down menu to the right of the section heading and select ‘VIEW PREVIOUS VERSIONS’. 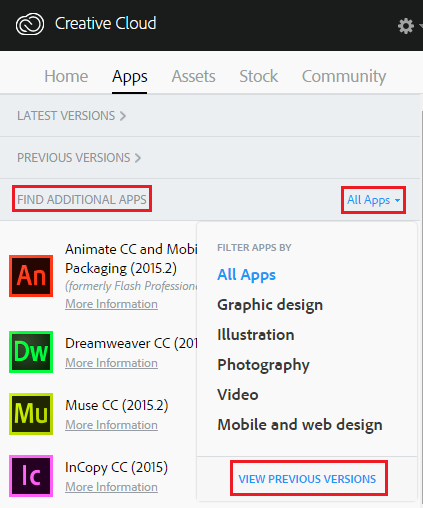 If you need version 9.1 instead, download Premiere Pro CC 2015 (9.1) from the links given below and install it.

The step by step guide cite from https://forums.adobe.com/thread/2170895, I am not sure it will work for all the users. You can try the easier method below.

Just like rename the xxx.mov files as xxx.mp4, it will be playback well on windows media player, you can change the *.mts files to the Premiere CC supported format such as *.wmv, *.mpg, *.mov. I am also not sure it will work for all the users.

Nevertheless, an all-in-one method can and should exist for every user if you transcode the MTS files to the format and codec to the Premiere CC supported. If transcoder or conversion tool is new to you, and you don’t know which one should you choose, then Brorsoft MTS/M2TS Converter or Video Converter should take into your consideration.

Brorsoft Video Converter is a professional and powerful too which has ability to transcode or convert any video and audio files to the compatible one for all your devices and Eidting Program.

You can play source files with the built-in player, take screenshots, select and preview subtitles and audio tracks. If you import source video files, you can even add external subtitles for output.

Click the settings button next to the Profile frame to specify parameters for output files. You can reset Video Codec, Quality, Video size (choose output video size from provided options, or manually input the size you desire into the box according to your devices or players), Bit Rate, Frame Rate, Aspect ratio, Audio Codec, Audio Quality, Sample rate, Channels, etc.

You can click Edit button to customize output files at your own will. Video editing features provided include: Trim, Crop, Text Watermark, Image/Video Watermark, Effect, and Audio Replace.

Trim: Allowing users to decide where to start and where to end when converting the selected clip, so that unwanted segments will be cut out after conversion.

Crop: Getting rid of the black edges and unwanted area of the image.

Text Watermark: Here, you can create a text watermark to personalize your video. For a text watermark, select the “Enable” box below the preview screen and type whatever text you want in the text watermark area.. You may strikeout, underline and transparent effect for the text. The font, color, size, and style of the text can be adjusted too. Click “Apply to All” to apply the settings to all the videos that are listed in file list.

Image/ Video Watermark: Here, you can import an image or video watermark to personalize your video.
Effect: Customize the output effect. Here, you can adjust brightness, contrast and saturation, apply gray, flip color, invert or Aged film effects and apply a number of deinterlacing options.

Audio Editor: Adding audio to target video file so that you can replace the original audio track with favorite melody.

Back to the main interface and click the “Convert” button to convert MTS files to Premiere CC supported format. You can see the converting progress, time, size, etc.

BRORSOFT BIG DISCOUNT ON SUMMER VACATION: UP TO 49% OFF FOR DVD/BLU-RAY/VIDEO CONVERTER

expire on 31,July. Meanwhile, you can get $5 coupon for free.

MTS to iMovie – Convert MTS for Editing in iMovie

How to Get Sony Vegas Working Beautifully with MTS Files