New video audio formats and technical terms constantly come into being in the developed multimedia market. Maybe you just go blank when comes into some terms. This part is aimed to explain these terms so that users can fully understand the advantages and disadvantages of different video formats, video parameters, audio parameters, etc. 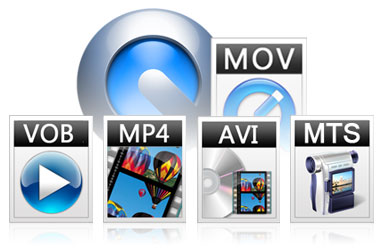 MKV – It is widely used by many systems because it is both an open standard and free. Learn More >>

AVI – It is a video container format that was created by Microsoft following the Windows for Video program. AVI is very similar to DVD videos as it can support multiple streaming and synchronous audio-video playbacks.  Learn More >>

MP4 –  It is a popular video format that is widely used for online video streaming and is compatible with most portable media players. Learn More >>

VOB – VOB, standing for Video Object, is one of the older formats and was developed by the DVD forum in around 1995. It’s usually used for storing DVD-Video media.  Learn More >>

ProRes – ProRes is a lossy video compression format developed by Apple Inc. for use in post production that supports any frame size (including SD, HD, 2K, 4K, and 5K) at full resolution. Learn More >>

M3U8 – A .M3U8 file is an ‘extensible playlist’ file format. It is basically a playlist containing UTF-8 encoded text that points at video files. Learn More >>

FLV – FLV is the abbreviation of Flash Video, which is used to deliver videos on the internet with Adobe Flash Player version 6 and newer. Learn More >>

ISO – It’s a DVD/Blu-ray image format that contains the data on the disc and can be burned onto DVD/Blu-ray disc.

If you have any problems when playing, editing, or sharing your videos and movies, you can check out this blog or just leave me a message below for help.