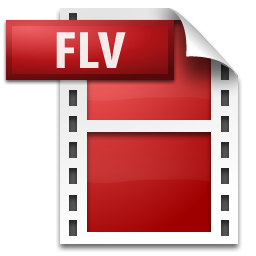 What is a FLV file

FLV is the abbreviation of Flash Video, which is used to deliver videos on the internet with Adobe Flash Player version 6 and newer. Two different video file formats are known as Flash Video: FLV and F4V (more like F4P, F4A, F4B). For many years FLV has been the popular choice for embedding video, and was adopted by YouTube, Google Video, Yahoo Video, Hulu, and many other services.The FLV format includes two components; the container itself along with codecs. Codecs relate to coders and decoders, and what is important to understand is that they reside inside the FLV container file. The FLV container defines how the file is structured in terms of storage locations, the way in which the data is interleaved, and the codecs (compression and decompression functions) that are used to organise the audio and video content. Essentially a FLV file packages the video data and its related components.

How to Play FLV Files

The easiest way to play FLV files is to download the VLC Media Player. VLC comes in different versions, one of which will be compatible with your computer system. There is a VLC Media Player that will work for Windows, Macintosh, and Linux computers. Once VLC is installed on the computer, playing the FLV files becomes as easy as browsing to it. On the other hand, Windows users who wish to use Media Player Classic to play FLV files can easily do so by downloading the necessary files and codecs associated with FLV. The installation of the FFDShow plug-in pack is recommended to make it compatible with the Windows Media Player.

As for Mac computers and Apple devices using QuickTime, there are no applicable codecs as of yet. QuickTime won’t be able to play FLV videos at all. The only workaround is to install a compatible FLV player. The most recommended one of course, is the Adobe Flash Player. However, there are many other programs that can do the same thing. For mobile devices though, the only workaround is to convert the FLV file into a format that is easily recognizable by the pre-installed media player.

The quality and file size of a FLV file is determined by the codec that is used rather than the FLV container itself. FLV format files are able to contain a number of different codecs. These are Sorenson, VP6, Screen Video, H.263, MPEG-4, and AVC. However it is important to consider the codecs with which they are not compatible. Specifically, while FLV files are compatible with the H.263 video standard, they aren’t fully compatible with H.264 (even though they are able to contain H.264). The importance of this is that the H.263 codec handles standard definition video, while the H.264 codec handles high definition video. There is no way to use FLV to properly stream high definition video.

FLV is not easily played by the native media players of both Windows and Macintosh. On the other hand, FLV is not well compatible with most video editors including Final Cut Pro, iMovie, Final Cut Express, Adobe Premiere Pro, Sony Vegas, Windows Movie Maker, etc. then converting FLV files to a more editing-friendly format is necessary.

Converting FLV files into a different format is fairly easy, provided that the user has the right tools and software for the job. One of the most recommended FLV converter is Brorsoft Video Converter (Video Converter for Mac). This video converter can easily convert FLV files into MP4, AVI, MOV, AVI, M4V, FLV, MPEG, DivX and hundreds of other formats. It can also customize the output file by setting its video parameters such as the bitrate, fps, resolution, sampling frequency, deinterlacing, and volume.